SIRTEF takes part in the expansion of the Panama Canal

In August 2009 work on project "Expansion of the Panama Canal - Third set of locks" began in Panama for a value of EUR 3.356 million and a duration of 65 months. 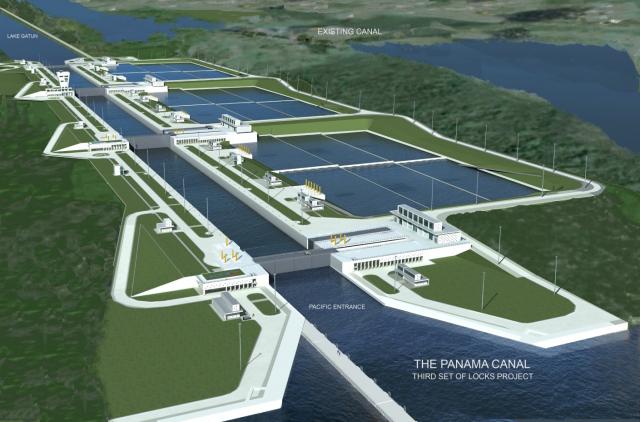 The project involves the creation of a new canal complementary to the existing one that will allow the transit of ships of new generation(superpostpanamax) with the aim of increasing commercial traffic following the trend of continuous expansion of the maritime activity.
These locks allow the lifting of ships from the level of the oceans to the Gatun Lake and vice versa, in less than two hours.

SIRTEF had the great opportunity to give a contribution to the project in cooperation with Cimolai Technology of Pordenone to develop the opening system for the doors of the new locks, reducing the diameter of the 6 strands rope (52) in place using a special rope Verope VeroPro 8 (diameter 46) which while maintaining the same breaking load has allowed to reduce the overall costs due to various optimizations performed on weights and carpentry.

In addition to the ropes, SIRTEF also provided Ropeblock sockets, assembled on VeroPro 8 rope and 226 Crosby designed forged sheaves, of 1.635mm external diameter, showed in the photo above.

The project was enhanced by the support of Roland Verreet, the greatest expert in the world of steel wire ropes, as well as the brother of Pierre Verreet, CEO of Verope, technological and strategic partner of SIRTEF.